From THE NEW YORKER

From the DALLAS MORNING NEWS 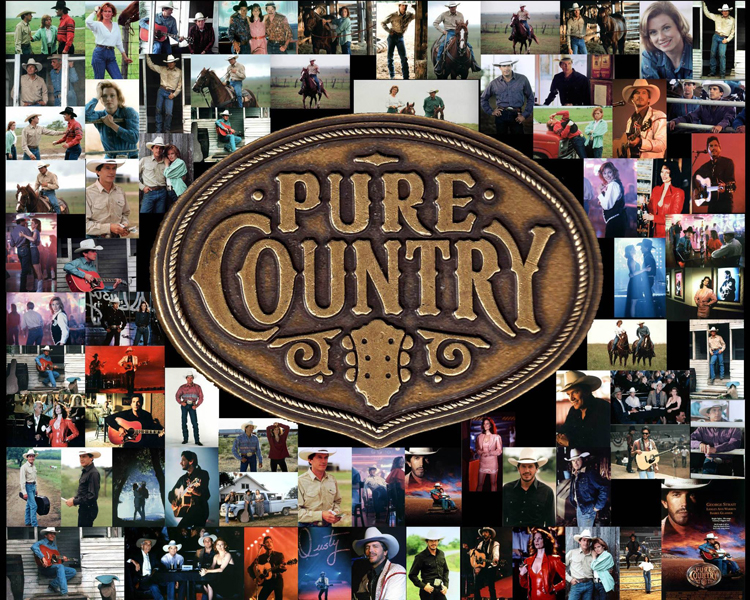 What do you think?

It’s one of the top 10 country music movies of all time.

Friday night, the creators of the movie, “Pure Country,” will celebrate its 25thanniversary.

We sat down with screenplay writer Rex McGee, who took a moment to take a look back with us. He says, when asked to write a script for the country movie classic, he had no idea where to even begin.

“And I found out very quickly who George Strait was at the time,” said McGee. “And I hung out with him back stage during his concerts, and talked to him, we went out to lunches together.

Pure Country features one of the biggest stars in country music. It was George Strait's debut role as an actor, and at the time, McGee didn't even know who George Strait was.

Rex was given simple but specific instructions by legendary producer Jerry Weintraub on how to write the screen play for the movie.

“It's got to have ten songs in it, and George has got to rope something in the film,” said McGee.

And in the film, there are 10 songs and George ropes a cow. But, McGee says other than that, he didn't know what he was going to actually write about. He went to several rodeos and country poetry readings, but still couldn't get going on a script.

That was until he moved back home to Cleburne, Texas, after spending 20 years in Los Angeles. He says that move gave him the spark he needed.

“It's been a long road, but it's been a satisfying one, and I can't believe I'm still talking about Pure Country, 25 years later, said McGee.

The movie was filmed all over North Texas, several scenes in Fort Worth, including Will Rogers Auditorium, Cowtown Coliseum, and Billy Bob's Texas.

And for the past 10 years, said McGee and his team have been working to turn the movie, into a musical, which McGee is co-producing.

“And we've got more depth to the characters than we had time for in the movie,” said McGee. “And then the songs just really add to it. I couldn't be happier with it.”

Friday nights 25th celebration for the movie will be at the Western Kountry Klub in Midlothian at 6:00.

The Premiere of “Pure Country: The Musical” is set for June 9th at the Irving Arts Center.

04-25-2017 - From the FORT WORTH STAR-TELEGRAM: ‘Pure Country’ ropes in 25th anniversary celebration

The instructions Rex McGee received when he was hired to write a screenplay for what became “Pure Country,” the 1992 George Strait movie, were simple but vague: Make sure it has 10 songs and a scene where Strait ropes something.

“I went, holy mackerel, what am I going to write about?” McGee says during a recent phone interview. “I went to cowboy poetry readings, I went to rodeos, and I was just stumped for a while.”

But McGee, who had only 12 weeks to write the screenplay, eventually would have an epiphany that allowed him to break that creative block. And for several weeks in 1992, “Pure Country” filmed in Fort Worth, Cresson, Midlothian and other North Texas locations.

Concert scenes were shot at the Will Rogers Auditorium, Cowtown Coliseum, Billy Bob’s Texas and the Tarrant County Convention Center. Strait was spotted eating enchiladas at the then relatively new Dos Gringos Mexican restaurant and chowing down at Michael’s Cuisine on West Seventh Street in Fort Worth, and hundreds of locals appeared in the movie as extras or in bit parts.

One of the locations was Western Kountry Klub, a 50-year-old dance hall that was used in honky-tonk scenes in the movie. It’s there that the 25th anniversary celebration of the movie will take place, beginning at 6 p.m. Friday (it’s an early celebration; the film premiered in October 1992). Jim Lauderdale and Steve Dorff, who wrote songs for the movie, will appear, as will McGee, who will tell stories about the movie’s cast and production.

The event, which will benefit the nonprofit Downtown Mansfield Inc., is also being filmed for a May special on Haltom City-based cable/satellite channel The Country Network (which does not currently have a DFW affiliate but streams live on its website). The event will include a silent auction, featuring autographed guitars, posters, a movie script and paraphernalia.

But as much as Friday’s celebration is about looking back, it’s also about looking forward: McGee, Dorff and Lauderdale, as well as John Bettis, who wrote lyrics for a couple of the movie’s songs, are getting ready for the premiere of “Pure Country: The Musical,” presented by Lyric Stage on June 9 at the Irving Arts Center. Julie Johnson, who appeared in the movie, will perform songs from the musical at the Midlothian event.

But in a way, that will be looking back, too, because “Pure Country: The Musical” has been in the works for some time.

“It’s been 10 years, really,” McGee says. “We had a big workshop in New York in ’08, and New York — they don’t like country shows at all. Anything to do with country music at all. The Broadway people just don’t care for that.”

The musical’s original producer died — in a sad coincidence, on George Strait’s birthday — and that sent the show adrift for five years. But McGee reconnected with Michael Skipper, a veteran Broadway producer (his credits include “In the Heights,” Lin-Manuel Miranda’s breakthrough show) who happens to be from Fort Worth.

“The guy Mike went to that usually finances his shows [had] never heard of George Strait, had never heard of the movie, the title itself seemed to be a downer,” McGee says. “So we figured we’d start in George Strait country and then work our way to Broadway, if ever. Our goal is to take it on tour. To take it on a Texas tour first, then a national tour, because George’s fans are everywhere, and they know this movie.”

The musical will use two songs from the movie, “Heartland” and “I Cross My Heart,” but don’t expect the musical to just be a stage re-creation of the movie.

“When I saw the movie, I was sort of stunned, because there were scenes that I know I saw shot that never made the movie,” McGee says. “I guess the scenes just weren’t working. But I think the idea of the musical was born the minute I saw the movie: ‘Where’s this scene? Where’s that scene? That doesn’t make sense.’ It was shocking for me to see it the first time.”

The musical, which McGee is co-producing, is a way of getting back some creative control. But he had to learn how to write for the stage, in a production that now has 18 songs.

“The story’s the same, but details have been changed,” McGee says, adding with a laugh: “We can’t have a barrel racer on stage.”

Based on a true story

The movie’s roots are both simple and convoluted. Movie producer Jerry Weintraub, acting on a suggestion from his mentor, Colonel Tom Parker, was looking for a vehicle to turn music superstar Strait into a movie star as well, the way Parker had, for better or worse, done with Elvis Presley. It was Weintraub who told McGee that the movie needed to have 10 songs and a roping scene in it.

In the movie, Strait plays Dusty Chandler, a country megastar who walks away from his concert world (which is more Garth Brooks than George Strait) to get back to his country roots, and finds love along the way. McGee, after struggling with Weintraub’s mandate, loosely based the movie on his own story.

“I had been in L.A. for many years, making a great living as a scriptwriter, rewriting other scripts,” says McGee, who was born in Cleburne and raised in Fort Worth and Burleson. “But nothing was getting made. About that time, the last member of my family died and left me this old house in Texas where I’d spent much time as a child. I just packed everything up and moved back to Texas so I could figure out what I wanted to write about.”

McGee had been in Hollywood for 20 years — he had even befriended and worked for legendary director Billy Wilder after Wilder unexpectedly responded to one of McGee’s fan letters — but felt like he’d hit a dead end. He came up with a script about a singer who had gone about as far as he could with his career and decided to walk away from it.

McGee was only at some of the North Texas locations, but he recalls Strait being reluctant to be an actor. “If you’ve seen him onstage, you know he really doesn’t move that much,” McGee says. “He just stands there and sings 27 songs and that’s it. I don’t think he’s done any [acting] since then. He wasn’t going to be an Elvis-like movie star.” (Internet Movie Database lists one other acting credit for Strait: a 2003 episode of the animated series “King of the Hill” for which he voiced a character named Cornell.)

The musical, McGee believes, is better than the movie, although he has yet to see a full production: He’s seen a lot of staged readings, including one at Casa Manaña in 2013. But then he and the songwriters have been at this for a while.

“We’ve hung in there, I tell ya,” McGee says. “I don’t know if we’re hardheaded or persistent.’

04-25-2017 - Broadway and Recording Artist HARLEY JAY to star in PURE COUNTRY, THE MUSICAL!

From NBC5 FORT WORTH

Written by REX McGEE, who also wrote the film, and featuring 18 great new songs by the award-winning team of composer STEVE DORFF and lyricist JOHN BETTIS, the new musical will be produced by Broadway veteran MICHAEL SKIPPER, who won a 2008 Tony Award for Best New Musical “IN THE HEIGHTS.”

Lyric Stage is Dallas County’s only locally produced, professional musical theater company. Dedicated to the development and preservation of the American musical, it has produced 17 world premiere musicals and two Off-Broadway productions.

Under the leadership of Founding Producer STEVEN JONES, it has become North Texas’ most honored theater, winning 35 Dallas Theatre League Leon Rabin Awards and a special citation from the Dallas Theater Critics Forum for excellence and innovation. 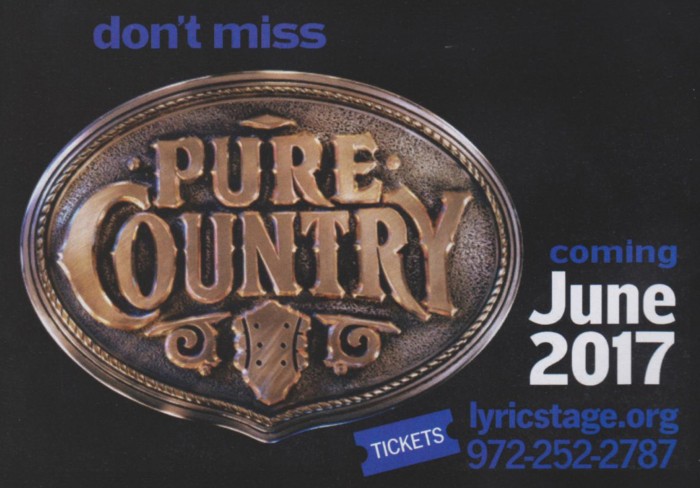